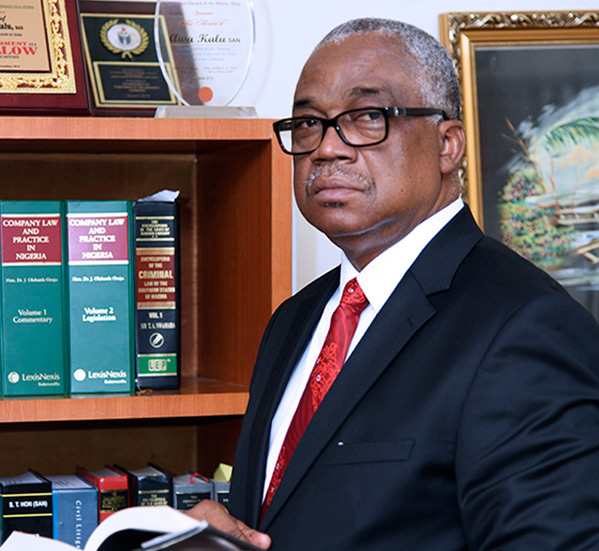 The Managing Partner is a consummate legal professional recognised as one of the foremost litigators in the country. He was admitted to the Nigerian Bar in 1978 after his education at the University of Ife (Now Obafemi Awolowo University, LLB Honours) where he won several prizes; and the University of Lagos (LL.M). During his 41 years active practice, he was, at different times a Lecturer at the University of Lagos, and Lecturer at the defunct Imo State University, Okigwe (now Abia State University, Uturu). He was appointed one of two Special Assistants to the Attorney-General and Minister of Justice of the Federal Republic of Nigeria- for the first time in Nigerian history- and served consecutive terms under Prince Bola Ajibola (SAN) and Clement Akpamgbo (SAN). He was decorated as Senior Advocate of Nigeria in 2000, thus ranking as one of the longest-serving silks in the country. In 2014, he was decorated as a Fellow of the Nigerian Institute of Advanced Legal Studies in recognition of his contributions to the academia and legal discourse in the country.

As a private practitioner, he established Awa U. Kalu & Associates in 1986 in Aba and later moved his practice to Lagos in 1993 between stints in academia and public service advising several Private and Public Sector Clientele. In 1999, he was appointed the first Attorney-General and Commissioner for Justice in the new democratic dispensation in Abia State and served for 6 years. In 2005, following this period of public service, he once again moved his practice to Abuja. In 2016, he expanded his firm to Lagos, returning to his old stomping grounds.

The Managing Partner is a voracious reader of fiction and nonfiction and an avid fan of tennis, boxing, music (particularly high life, gospel and old school rock), and football.